We all want to teach for the love of learning and I bet lots of us wish that we didn't have to give grades. I firmly believe that grades should not be used for motivation, BUT, when done right, they are super useful as a way to clearly communicate what students have learned and where they need to put in more work.

In  my 10th grade classes, we are using standards based grading, and so far, it's supporting the goals that I have for my classes immensely because the grades are composed of both mastery of learning objectives and the "softer" practices we also want to foster in students. Grades are seen as individual pathways and ways to continue improving and to get more focused coaching from teachers on how to get there.

In my 7th grade classes, for which I don't give grades, only narrative feedback, I am really struggling with how to focus students and have them work at getting better without the structure and clear communication imposed by a grading system. For example, I gave a quiz a few days ago and there were a number of students who didn't demonstrate mastery on a few topics. Today, I gave the quizzes back with lots of feedback. I also made a spreadsheet like this for each student, with an assessment of mastery on each topic and very specific comments as to what they should be working on: 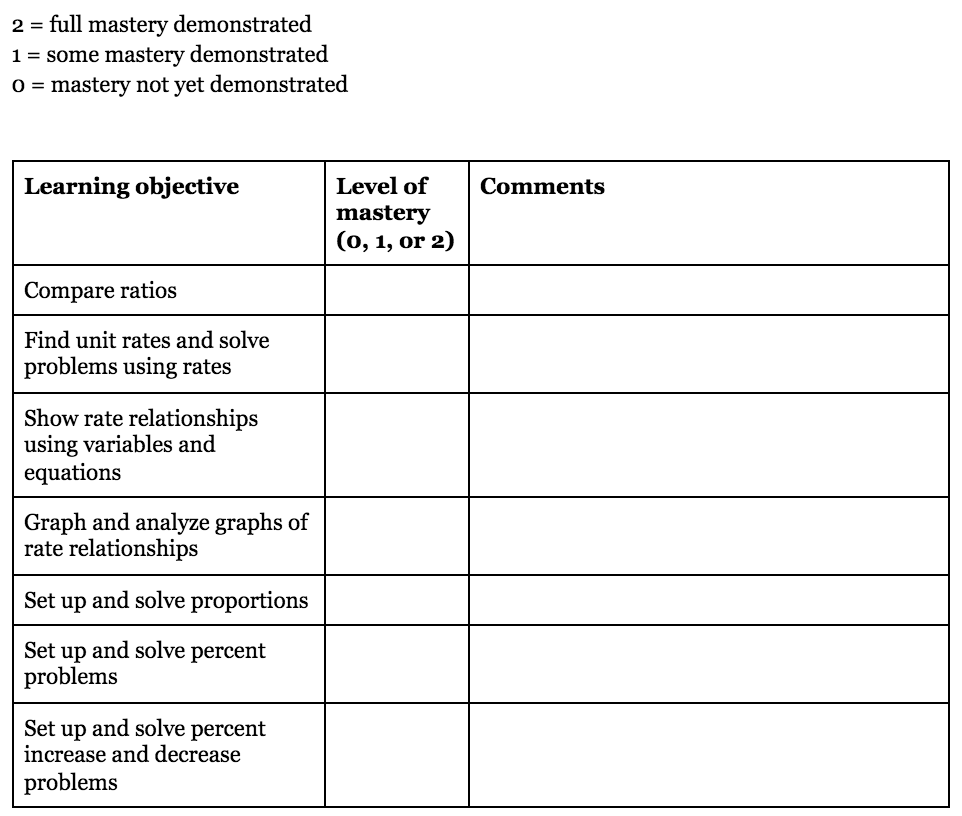 Quizzes were given back and students were told to rework problems on the quiz that they got wrong, first asking their group for help if they were stuck and then me if the whole group was stuck on the same question. They were also given extra practice problems for each learning objective. The result was pretty crappy. They were not engaged with this at all. Instead of helping students or groups with questions on which they were stuck, as I imagined I would be doing, I spent my time policing a class of students who wanted to do anything in the world but the task at hand and putting out behavior fires.

My middle school classes do well with open tasks, interesting projects, games, and puzzles and I totally believe that we should have lots of those things in a Math class. But, I also believe that students need to be able to demonstrate understanding of course objectives. Without grades, I don't know how to build in accountability for doing the latter. If you're 12 and don't really care if you can't set up and solve percent problems, how do I make you care? Is a class supposed to be full of fun and rich activities at all times?
Posted by Anna Blinstein at 6:29 PM No comments:

Gaaahh. I've been so busy with the new gig this past month that I've hardly had time for sleep and the occasional run, much less blogging or hanging out in the #MTBoS. I want to give a quick summary of the Statistics unit that I'm wrapping up with my 10th graders. It's been a really, really fun unit, in large part thanks to my awesome coworker @michaelpeller, who's graciously been allowing me to steal all of his sweet, sweet statistics projects and explaining stats things to me slowly and repeatedly.

We spent the first three weeks working with one-variable statistics: measures of central tendency and spread and understanding normal distributions and standard deviations. I pulled a lot of activities and problems from the Interactive Math Program, a really great high school textbook series for integrated Math. This unit was so rich in applications and connected well to the probability theory students studied last year.

The first project that brought things together for students had them analyzing the massive international data sets available at gapminder.org/data. Students picked a particular set of data that was interesting to them (anything ranging from infant mortality to literacy rates to square kilometers of forest) and analyzed it for the world over a period of several years using statistical measures, as well as for the United States and another country (I asked them to use a country in which the foreign language they're studying is spoken so that they could report on their findings in their language class). Full directions for the project here. Great way to get students to be excited about means and z-scores! I was blown away by their projects - lots of students researched to learn more background about their question and to explain the differences in the world data vs. what was happening in the U.S. and the other country they analyzed. The presentations took an insane amount of time though, what with students going way over the recommended time frame, technology malfunctioning, and two fire alarms that happened on consecutive class days. Teachers who have students present their projects in class, any suggestions on structuring this better? Classmates were attentive and asked good questions (I had them give feedback to each other that was shared so that helped with engagement, I think), but it took a loooooong time. Given how little time I have this year to teach so much content, I was hyperventilating a bit at giving away a full week for presentations. 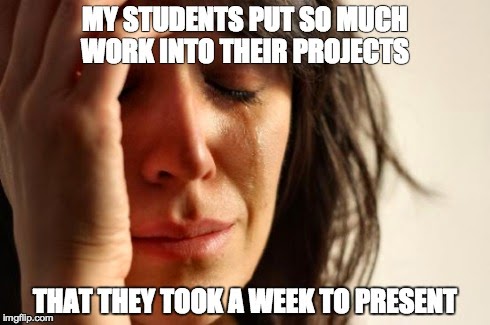 For the past three weeks, we've been working with hypothesis testing, doing the classic M&M lab to introduce chi square testing. This part of the unit gave us great opportunity to do interdisciplinary work. Biology was also doing work with chi square testing so students got lots of practice in both math and science classes. When we moved on to tests of homogeneity and independence and z-tests, one of the History classes was studying social dimensions of race in the post colonial period in the Western Hemisphere so gave us some nice tables of data to analyze. Students did the statistical analysis in my class and got the context for what it means in their history class. Score. These kinds of easy areas of overlap are going to become harder to find when we move to more abstract units so I'm happy I could find some now. 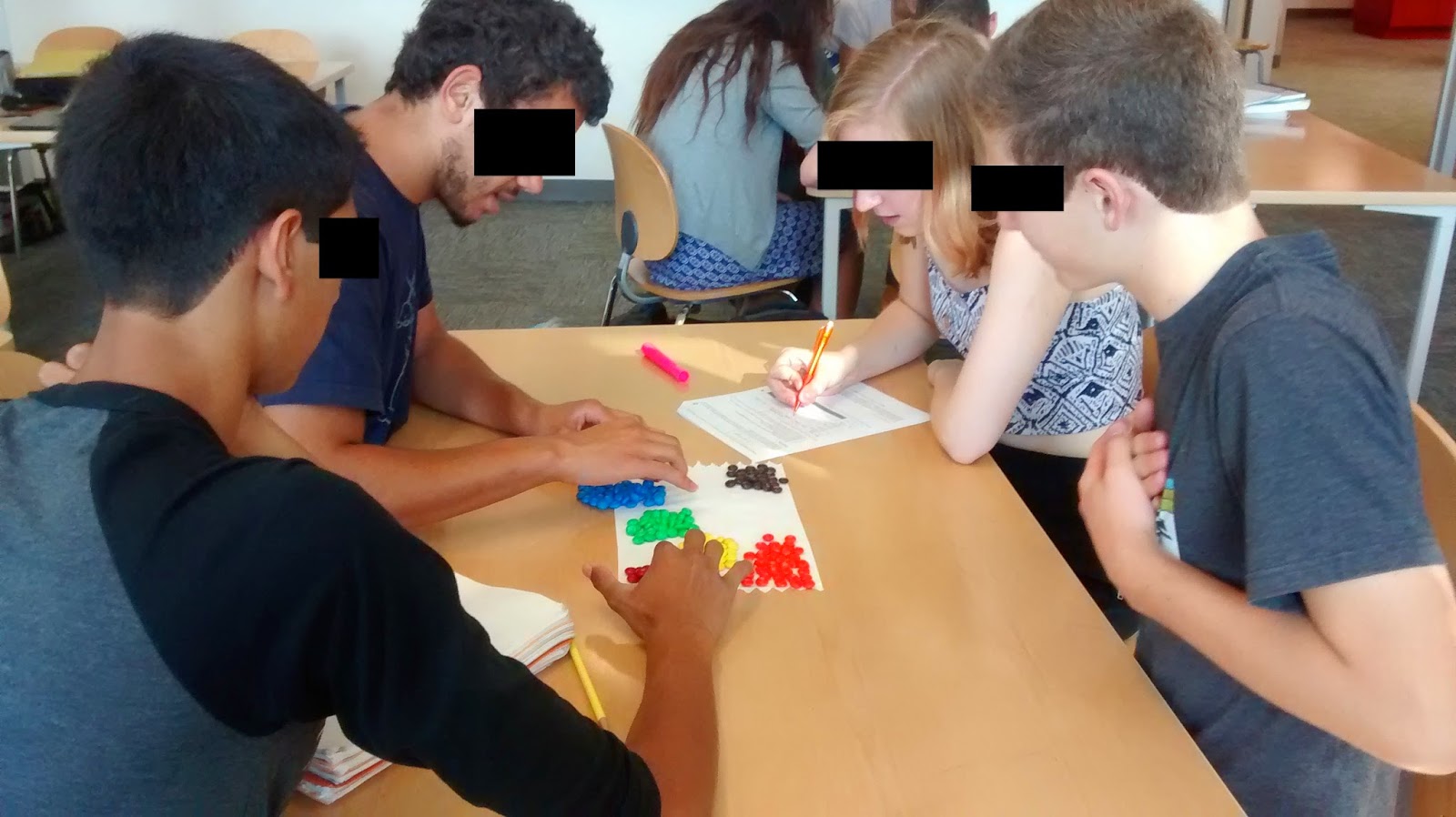 Counting up observed values of M&Ms

Our final unit project is for students to design and conduct a research experiment on a question of interest to them and analyze their results using hypothesis testing. These are due next week and I'm very curious to see what results they generate.

The one complaint that students have had, and one that I really want to resolve, is that they feel like they don't conceptually understand all of the formulas. I did try to derive with them as many as we could, but some (like the formulas for sampling error) require more math than we currently have. This is something I've struggled with before... should we only be using and working with formulas/theorems that students are capable of deriving or at least being able to recreate the derivation of? I hate waving a magic wand and pulling formulas out of thin air (or at best, giving promises that one day, if they take more advanced statistics and probability theory, they too will be able to see behind the smoke and mirrors). Bleah. I love that students are dissatisfied with simply receiving formulas from on-high, and I want them to continue expecting rigor and proof in what we're doing. How do others make peace with this?
Posted by Anna Blinstein at 1:02 AM No comments: