When I first started having students to present their work to the class, I quickly realized that wanting to have good student presentations was oh so removed from having good student presentations. Half the time, the work was hard to follow or the explanation didn't make a ton of sense to the rest of the class or the way they did the problem was so wrong as to not even really be useful for discussion or even when everything was great, the rest of the class wasn't remotely interested because they had just done the same problem in the same way so why did they need to hear another group explain what they had already done themselves? And kids were just not used to sitting through presentations done by other kids. They were restless, distracted, and lots of classroom management was required to get some semblance of presentation. Not to mention the fact that I don't think these presentations did much in terms of any sort of math learning. I think I was just doing them because I thought I was supposed to do so? 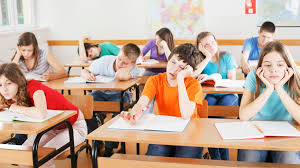 I loved "5 Practices for Orchestrating Productive Mathematics Discussions" when I first read it a few years ago. It was the most succinct and clear set of explanations for how to organize discussions around student work. The key idea for me was that it involved NOT calling on random groups to present and that it required giving students problems for which there are multiple approaches. The idea is that the teacher selects which work should be discussed and that there's a rhyme and reason to the work that's selected and the order in which it's presented.

Having an Apple TV and iPad in my classroom the past two years has also been very helpful for doing the selection of student work and sequencing it in an order that makes mathematical sense. Before the Apple TV, I would run around the room, taking notes and trying to then remember which group I wanted to go first and why. Also, even with my giant whiteboards, some students feel the need to write microscopically.

Now, I just take a picture of the various approaches that I want the class to discuss, put them in the order that I want using the Notability app (you could use any app that allows you to stick in pictures), and then projecting each picture in the correct order and big enough that even my tiny-handwriting students' work can be read.

My other breakthrough was that having problems with multiple approaches is key because it really is boring and pointless to hear presentations of the same thing you've already done. It's much more interesting to see and learn from different ways to the same problem. If the content doesn't lend itself to problems with multiple approaches, you can assign similar, but not the same, problems to different groups. It can make for a good progression when the problems build on each other or when each has only one element that has been tweaked.

I have also been working with students on making the presentations more useful. Instead of just talking about what they did from start to finish, every group after the first one is asked to explain what they did differently from the other groups and discuss the benefits and drawbacks of the approaches. At the end of presentations, I also ask students to summarize the different ways and discuss when we might use one versus another.

Another issue that I had is with putting up work that had mistakes in it. Students would freak and be horrified that their WRONG work was being shown to everyone.

It helped a lot when I stopped attributing which group the work with an error came from and emphasizing how useful the mistake was to our learning. It's February, and I'm finally getting to the point where students ask whether their mistake is interesting enough for showing to the class. Score.

The things I'm still struggling with for group presentations are how to talk less and make them talk more. I still find myself doing a lot of the "summarizing" and pointing out key aspects of the work to the class, and I want to push myself to turn that over to the students. I would also like to find more ways to increase the engagement of the students who are listening to the presenting group. Perhaps asking them to write a summary or some other response after presentations or require each group to ask a question of the presenters. Other ideas?