Modeling tasks: what if there is no third act?

As part of a Modeling with Mathematics workshop that I ran for teachers with @zmill415 a few weeks ago, I had the chance to play with a few different formats for modeling activities and reflect on the types of thinking and representation that were done. We introduced a number of Three Act tasks, which the teachers really enjoyed. Generally, Three Act tasks have a specific question that students are trying to answer by creating a model... it's in the very structure of the format, in which the third act is the "reveal." I've always felt some tension between this format and the idea that the focus should be on process and not solution. Yes, we're valuing different paths and approaches, but ultimately, the one that gets us to the right answer is the one that's going to feel most rewarding for students. So for one of the modeling tasks with which we had teachers engage (a slinky lab in which we investigate the relationship between the weight attached to a slinkie and its length), I specifically did not ask the teachers any questions or set up a conflict that needed resolution. We simply discussed what they noticed and wondered about a slinky and then selected the relationship between weight and length as one that would be investigated in more detail. I was really struck by the richness of the conversations and representations that came out of this activity compared to other modeling tasks we had done together. The goal was to understand and represent the relationship and look for interesting connections between various representations, and the teachers really dug into this question. 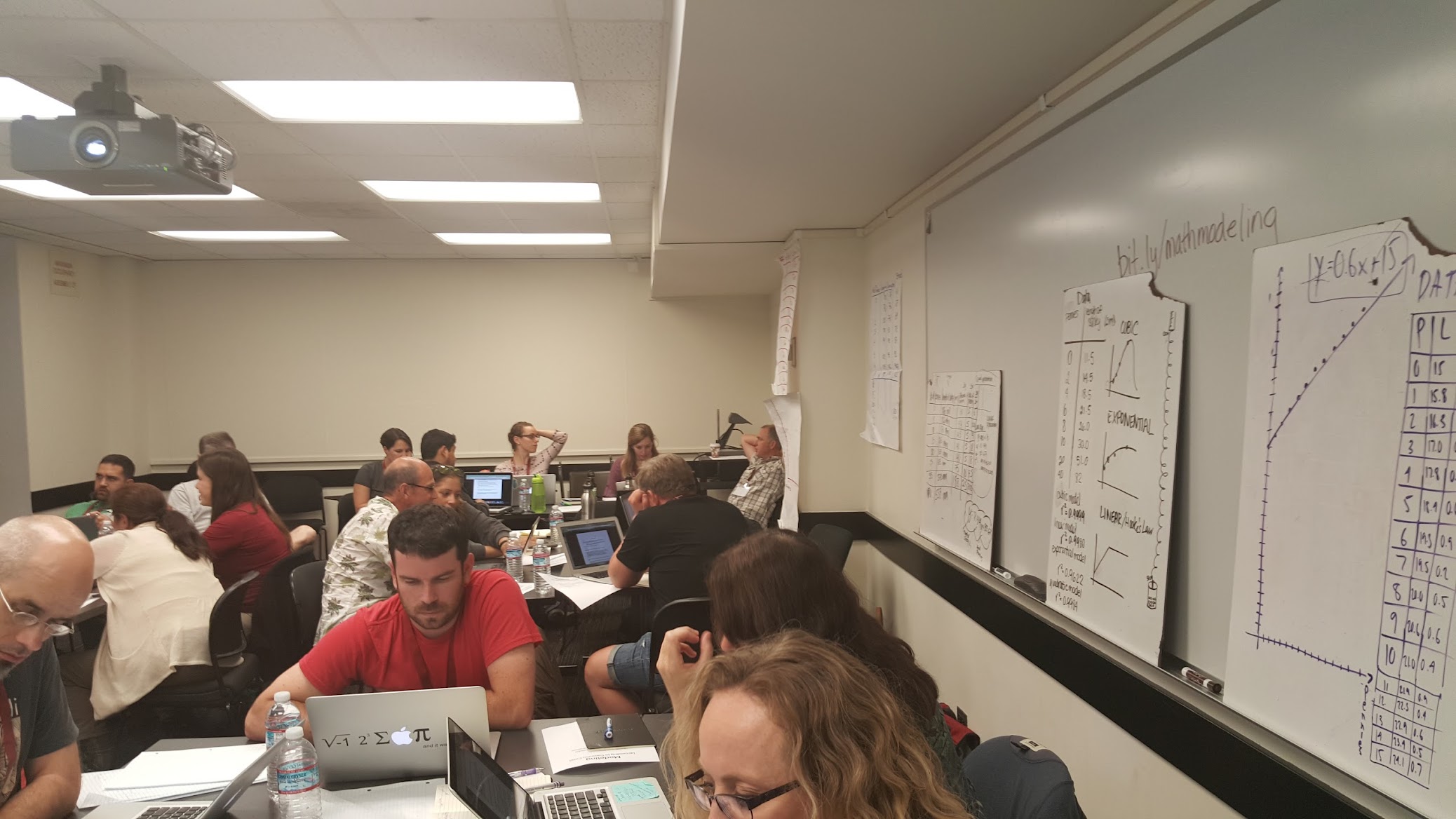 Modeling teachers reflecting on their experience with the slinky lab 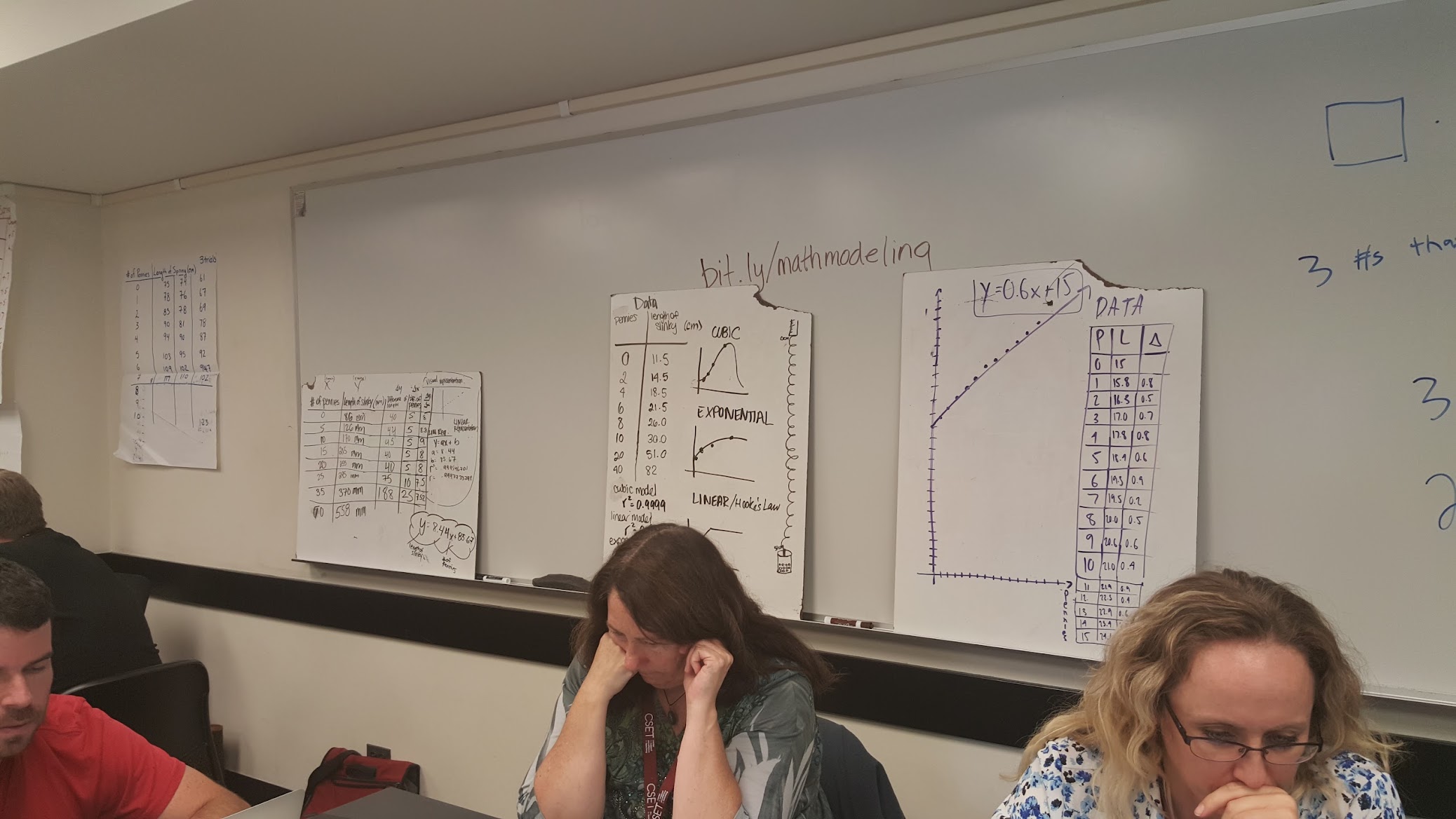 More views of their whiteboards


Obviously, I'm not saying that we should be throwing away the Three Act framework. Clearly, tasks with a fun and engaging hook that sets up a conflict or ones where a student might engage quickly with a guess are popular with students and provide excellent "needs" that prompt the development and application of mathematical tools. But, I do think that there is a place for tasks or activities in which the goal is just to tinker and think about how something works, where there is no resolution or ultimate reveal. I also make the bold claim that thinking of modeling only or primarily within the Three Act structure does a disservice to students in its focus on getting the right answer, especially if the purpose is to more closely mimic how actual mathematics is done.

I was recently reading a biography of Terry Tao, a leading mathematician and Fields medalist, and was struck by his description of doing mathematics: 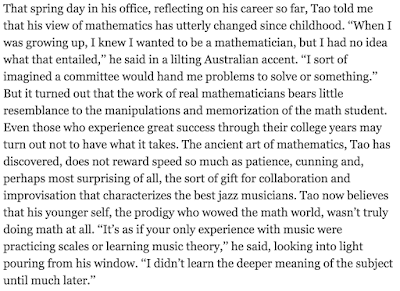 His analogy to doing mathematics as being similar to being a jazz musician really struck me, as well as the notion that mathematicians are not handed problems to solve. I don't disregard the ability of Three Act tasks to hook and engage students, but I do hope that there is balance with the types of activities and tasks we ask students to do, and that there is also inclusion of more open investigations, an opening of our students' minds to curiosity and wonder about how things work and how we might describe and understand them better using mathematics, not just because it might give us correct answers, but because it's interesting and engaging to try to know and understand something beautiful.

Posted by Anna Blinstein at 4:28 AM

Email ThisBlogThis!Share to TwitterShare to FacebookShare to Pinterest
Labels: modeling