Proof in a non-Geometry classroom

A beef that I have long had with the standard math curriculum is that for many students who don't take college math courses, proof is a weird one-off that you do in a Geometry class for one year, writing algorithmically in two-columns full of acronyms. You know it's coming, but certainly aren't expected to do anything about it until you get to Geometry, and then, just as enigmatically as it appeared, it vanishes from the curriculum again. Truly, a mystery.

I began to rethink my own views on proof and how its definition might be broadened to make it a more regular component of ALL math classrooms when I read Avery's blog post on redefining proof several years ago. More recently, I've been thinking a lot about how to help students become more rigorous and formal in their proof writing, while still treating their informal reasoning and ideas as valid and interesting in their own right, not just as a stepping stone to "more correct" proof.

Teaching an integrated math course to 8th graders this year gave me some unique opportunities to play around with proof and formalization. The year starts with a unit centered on the Pythagorean Theorem and culminates with a project in which students choose a proof of the theorem (we used a collection of proofs at Cut the Knot) to study and then present their proof of choice to peers. There's a great variety of proofs there in terms of complexity and usage of algebra/geometry/trig/similar triangle concepts and focusing on analysis of existing proofs emphasizes what it means to understand a proof and be convinced by its reasoning. We also had a great class discussion about the difference between an example or demonstration and a proof, looking at several videos "proving" the Pythagorean Theorem that really only showed it to be true for a specific instance. 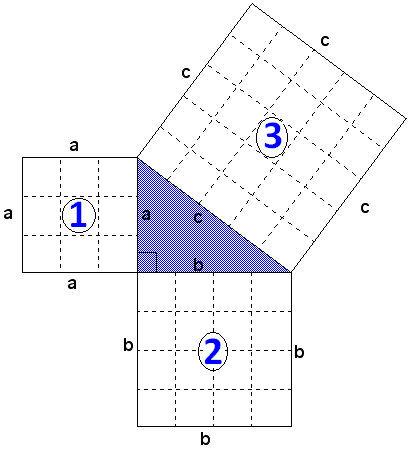 That was pretty great, but there was nothing in the curriculum that built on this for the rest of the year so I decided that halfway through the next unit, we would do an exploration of polygon areas that would lead students to Pick's Theorem where they could start to write their own proofs, but I really struggled with structuring it in a way that honored students' existing reasoning, but also pushed them to formalize more and consider proof techniques, such as casework. If you haven't seen Pick's Theorem, it's a neat little formula that connects the area of a polygon whose vertices are points on a lattice to the number of lattice dots on the perimeter of the polygon and the number of lattice dots in interior of the polygon.

The structure I eventually created seemed okay, but definitely produced mixed results. All students were able to come up with a conjecture for the area of a lattice polygon, but even with my hints (which I thought were maybe too helpful), virtually no students were able to make progress on proving the theorem on their own. 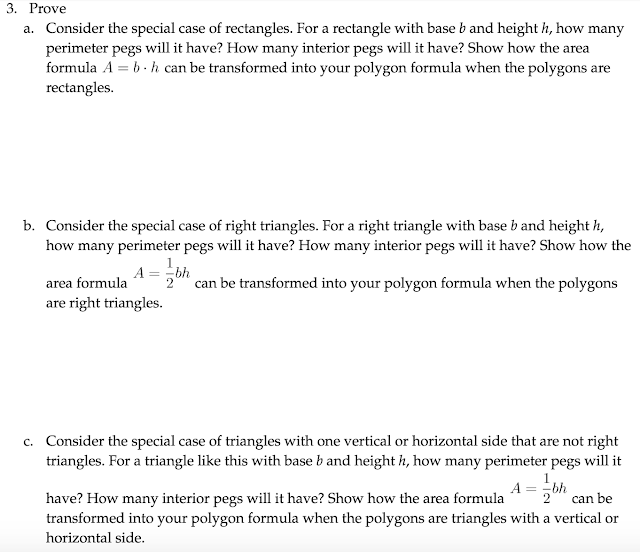 Questions I now have:

I do have some thoughts on these, but would love to get more input and ideas from the community.
Posted by Anna Blinstein at 12:29 PM