One of the goals that I set for myself this year was to make writing a more regular part of my class, rather than the add-on journal entries I've had students write the past few years. Kids had been resistant to these (a few refused to do them at all) and I felt like I wasn't seeing much improvement as the year went on. Those who were reflective and took the assignments seriously got something out of it, but lots of kids did a crappy job, took a 1/3 or 2/3 score and moved on with their lives.

So this year, I started the first real unit (after reviewing last year's Algebra 1A material) with worksheets that kids started on in class and that had more problems and a reflection piece at the end for them to complete at home. Here's one (adapted very closely from CME Project Algebra):


I used the same writing prompt each day:

How well did you understand today’s lesson? Use one or more of the following prompts to help you answer this question (write at least a few sentences, include at least one example).

Some positives:
Things that still need to be worked out:
Here's one of the better ones from last week because this student actually explained their example in detail. Again, I'd like them to go a bit deeper into the "why," but at this point in the year, I'll take it. 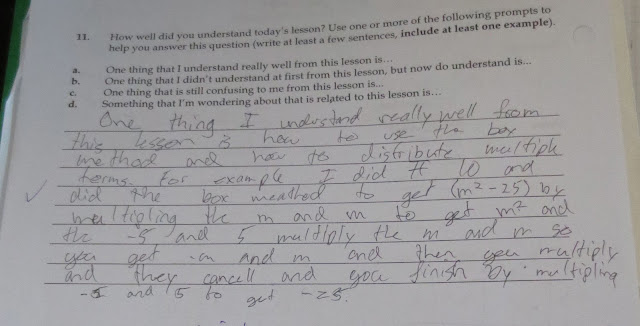 So, a few things that I know I need to do to promote better writing:
Any other suggestions??
Posted by Anna Blinstein at 7:42 PM