We've all been there... you find a task that seems awesome. You start reading it and you get excited. There are so many different strategies that can be tried. There's a visual and algebraic aspect to it and a chance to try specific examples, make generalizations and predictions, test them, and build and justify a model. You spend a bunch of time exploring the different paths you think students might take, how you're going to give them feedback and what you'll assess with this task, how it fits with the rest of your curriculum, how you'll structure individual work time, collaboration and class discussion, how you think the lesson will flow, and how much time you plan to give to each component. Mostly, you're excited because you think it will be engaging and fun for students and will also bring up really interesting and important math ideas and practices. You introduce the task in class, eyes aglow with that special teacher light reserved for days like this, rubbing your hands in anticipation for the awesomeness about to unfold.

Except that it doesn't. At all. Kids seem confused. Then, frustrated. Heads start to go down onto desks along with pencils. Silent think/work time becomes sad, frustrated time, then out-loud complaining time as you slowly realize that this task is bombing and how. The kids you'd especially hoped and planned to engage, the ones who only sometimes engage, are the first ones to go. You try to rally the troops, but it's a lost cause, and you end the class demoralized and humbled. X years into this thing and every day still has the potential for catastrophe and epic failing (you may or may not be exaggerating the dramatic nature of the experience, most kids probably shrugged their shoulders and went on with their lives, but it was a hard 30 minutes for me, dammit!)

Where do you go for solace and a sympathetic ear? To the Math Twitter-Blog-o-Sphere, of course!


That feeling when you spend hours planning an awesome investigation for students and they hate it... pic.twitter.com/0xg8yIPcrh
— Anna Blinstein (@Borschtwithanna) March 21, 2017


Thanks to the advice and thoughtful questions of all you fine folks, I was able to reflect on the task design and recognize that the sheer wordiness and immediate jumping into very abstract ideas was a huge turn-off for many students. 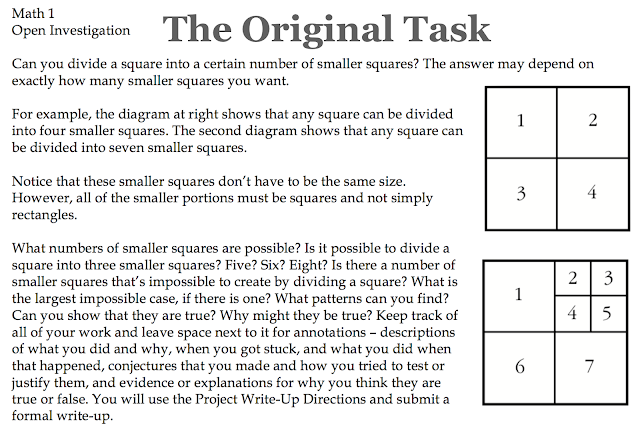 Students had been doing so well with open investigations that even though it had been a little while since we had done one, I had completely abandoned the normal structures that coax kids who are not super sold on this Math thing just yet to try things, engage, take guesses, get a foot in the door, and progress towards increasing abstraction and formality at their own pace.

Fortunately, I had another class the next day with which I had planned to try this task. Back to the drawing board.

I started with a story. It's my birthday, but I'm really, really obsessed with all things square. My entire party has a square theme. Of course, I demand a square cake and that all pieces served to guests are perfect squares too. I can have my own party and eat the entire square cake myself. I can be a bit more generous and have a party for 4 since I can cut the cake into 4 perfect square slices. I can be even more generous and throw a party for 7 by cutting the cake further. 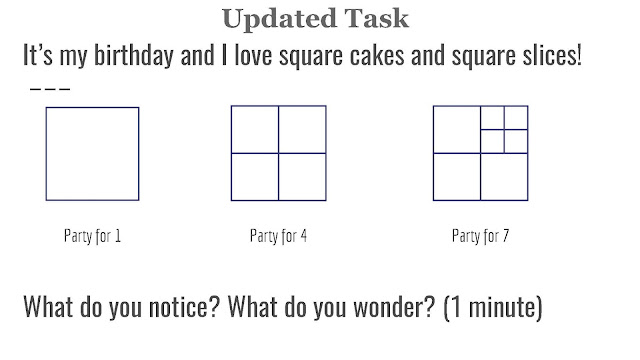 This was a natural segue to asking students what they noticed and wondered, which brought out all the key features of the problem that in the earlier version were laid out in many, many words. Namely - is it possible to throw a party of any size if the slices must be square (but don't need to be of equal size)?

Students immediately had gut reactions and strong opinions. Some were ready to look for patterns right away, but for most, an opening question of: can you make another arrangement that we don't already have on the board? sent them on their way.

There was another breakthrough when a student presented a convincing case for 6 pieces (as well as 11) and others realized that they could always add 5 more pieces by putting another layer on the outside. 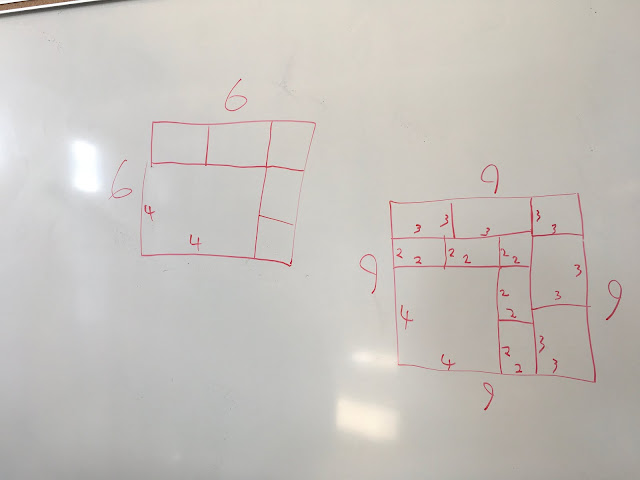 This was the class I'd been hoping and prepping for when I found this task. Engaged, arguing, changing their minds, kids working past the end of class and needing to figure this out.

Take-aways for me? Don't assume that kids have graduated past scaffolds that help them get started and build up to abstraction. If you're going to take them away, be aware and think deeply about how to do that carefully and thoughtfully. It's hard to reclaim a class that's lost its confidence so pay attention to this part.

I went back to the first class and tried again. With the reformulated question, things went much better. One of the students who had struggled the most the first day came up with a great organizational chart (that she said was inspired by Pascal's triangle) for tracking possible party sizes. 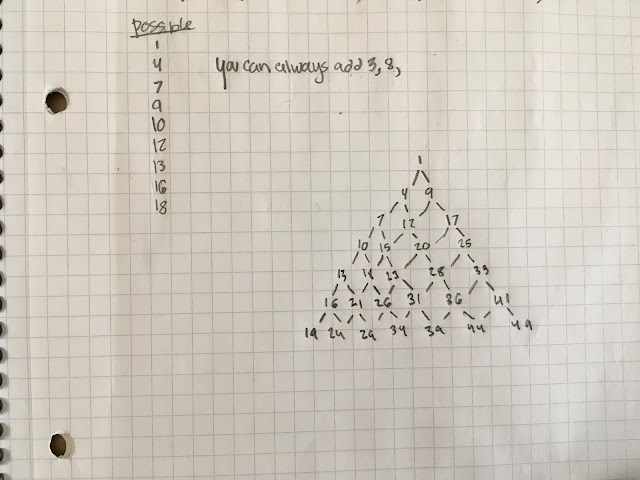 She did have to amend it when another student came up with the 6 and 11 square versions since her version only assumed you could have perfect squares and add either 3 or 8. 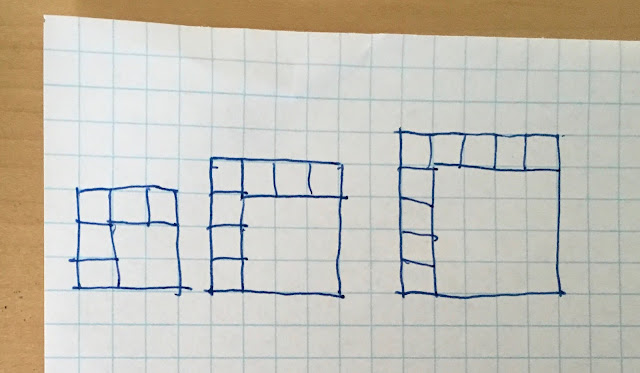 Next step for both classes - helping them transform the patterns and ideas they have into more formal written explanations and justifications.