Reviewing with the Mistake Game

So I've meant to try playing the Mistake Game via @kellyoshea a while ago... We often analyze students' actual errors or do "My Favorite No" with index cards, but the idea of the Mistake Game is that students create errors on purpose, which I thought would be really helpful as we are starting to review for the end of the year final exam and I wants students to have some metacognition about the hierarchy of concepts and what's more or less important to know. So today, I had students working in their groups using their large whiteboards. I assigned a different chapter to each group and asked them to look through the material in that chapter, decide on a Very Important concept, and then create a problem relating to that concept that had a Very Interesting mistake.

What I found really interesting in their work on this activity was that there were several awesome things on which students focused at various times. First, they had to analyze the given chapter and determine what was important and what was tangential and then find or create a problem that got to the heart of the concept, which I think is very useful when reviewing. In creating the mistake, they needed to think through common misconceptions of this concept to determine a mistake that was actually interesting. Students also had a really hard time (in the best possible way... as in, they struggled, but it was so good for them) with asking questions that were not just statements with a "Shouldn't you have..."or "Isn't it true that..."in the front. Asking an actual question requires the students to put the concept into words rather than describing the action taken.

Here is the first mistake that a group presented from the lessons on multiplying polynomials: 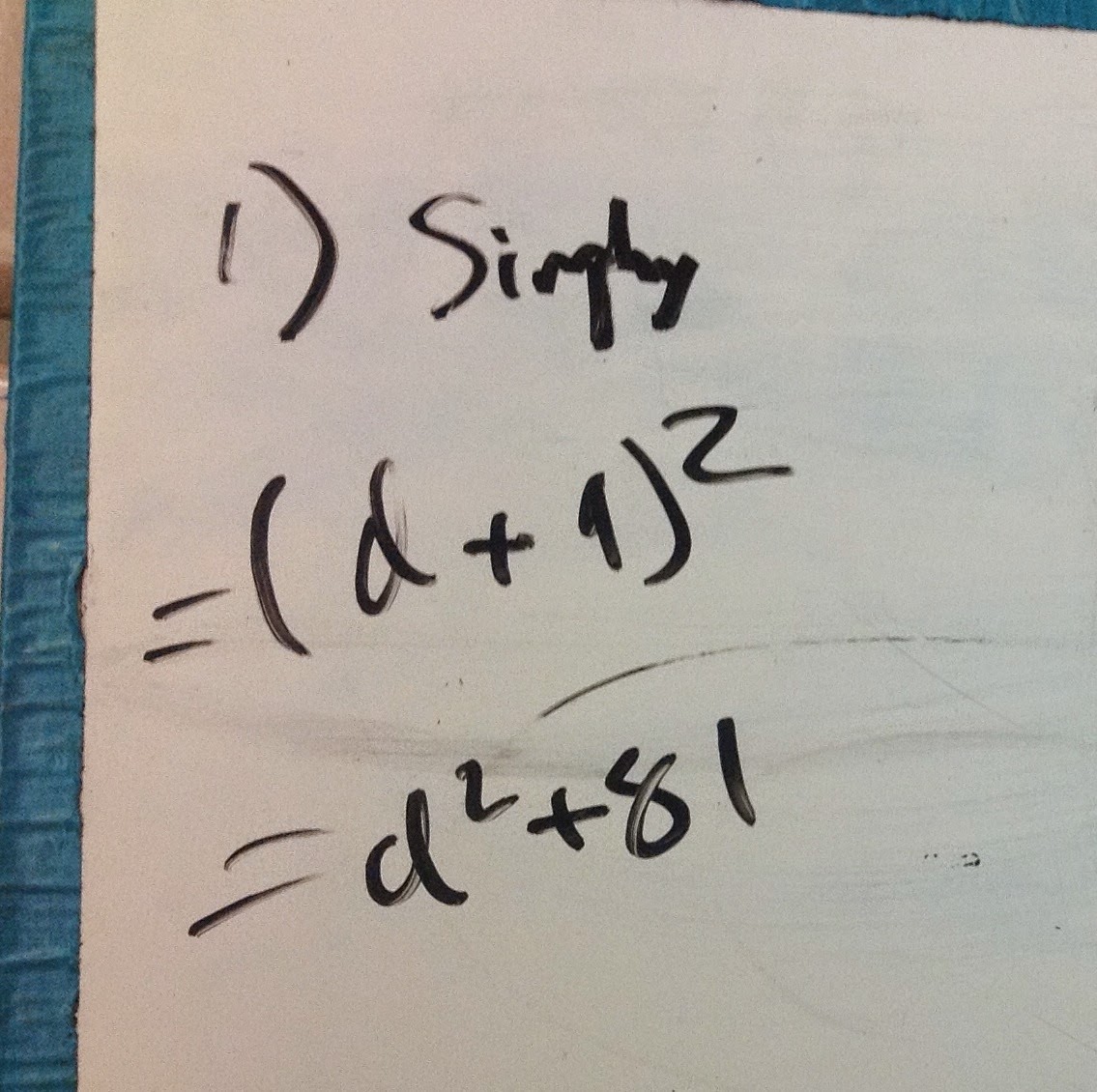 Some good questions that students came up with:

What I liked about this activity was the high level of student engagement and interest, both in creating mistakes and in analyzing them. The challenge of trying to create good questions was much more engaging for them than I thought it would be. I had assumed that the focus would be on figuring out what the mistake actually was, and maybe that will be the case as we do this more and students get better at creating more subtle mistakes, but even with really obvious, glaring mistakes that most everyone spotted right away, this activity resulted in a lot of learning because of the focus on asking good questions that didn't simply state the error. I also liked the focus on question asking rather than answer getting... kids who don't participate as much were more active today. All in all, quite happy with how this activity worked out and will definitely be trying it again, although I'll probably need to rotate in other review activities since we have quite a while longer to review and I want to keep the engagement level high. What other activities do you use for review that perhaps require students to dig a bit deeper?
Posted by Anna Blinstein at 12:08 PM