Icebreakers that teach group norms - accept failure, learn from others, work through frustration

I'm attending a four day conference at The Nueva School on design thinking this week. I'll blog in a bit about the main content of the conference (done!), but I first wanted to get some thoughts down about the activities we did on the first day to build comfort with each other and establish the group norms that would be really vital for the design thinking process. These are centered around empathy for others' points of view, celebration of process over product, and learning through repeated cycles of trying/failing/changing. The activities that we did on the first day of the conference did a great job of both helping participants get to know each other and create a safe space, but also to set up these key aspects of learning without which design thinking isn't possible.


Come get your imaginary points:

We reflected throughout and were explicitly asked to make space for people who hadn't participated as much yet, which I thought was a good thing to do when doing this with students. Basic scenario was: 3 people in the middle of the circle acting out a scene, someone from the audience taps one out and changes the scene. For the last go-round, instead of tapping out, each new person added to the scene, which was a nice way to get everyone included and participating.

Activity #2:
This was perhaps my favorite thing of the day. I really wish I'd gotten a better picture of this, but the basic idea is that each person gets a sheet of paper with two concentric stars, a mirror in a stand, and a piece of cardboard with a cutout for their hand to fit through. Their job is to draw a third star in between the two concentric stars while only looking at the reflection of their hand in the mirror, not at their hand directly. It looks kind of like this, but if you cut a hole in the cardboard, it's a little easier to draw without looking. But seriously. This activity is amazing for dealing with frustration and failure and getting people on a level playing field. Everyone is just awful at it and it's just about trying over and over again and letting go of perfection. I've also been told that this is a great activity for people who want to know what it's like to be a dyslexic since the entire premise of the activity is fighting the image you see and reinterpreting the visual cues from how you think they look. A great activity to have kids reflect on frustration.

Activity #3:
Two people face each other where only one of them is facing the screen. The one who can't see the screen has paper and a pencil and the one who can see the screen directs the drawer to replicate the image on the screen using only words, no hands (we were told to sit on our hands). I've done activities like this with students because it's really helpful for reflecting on what makes for good communication and how important it is to take the other person's point of view into account (for example, when using directions, like "up" or "right side"). This also deals with frustration, but frustration directed at another person who either isn't understanding you or isn't communicating clearly enough for you to understand and how to work through that.

Activity #4:
This was the first building activity. We were instructed to build the strongest bridge we could out of a single sheet of paper. It had to go across a bin that was about 9 inches across so that meant we had to use pretty much the entire length of the paper. We were given metal nuts to test the strength of the bridge. And go! 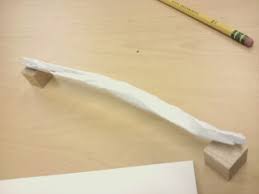 It was really cool for me to work on a task that was so open. As a math teacher, I am used to having a lot of constraints that I need to first analyze and understand, lots of equations and thinking done in the abstract and on paper before I'm ready to actually test it with any sort of real-world application. I am very comfortable with tinkering and trying ideas in writing, but I haven't really ever done projects where you make things first. I felt very unmoored and outside of my comfort zone, but I think that it was really good for me because that's how students often feel. It was scary to do something where I had no idea how to start. This is a great activity for helping kids be comfortable with repeated failure and with just jumping in and trying things, as well as for how to look at what others are doing and integrate different ideas or build on each other's approaches. Like all of the other activities, throughout this exercise, we were also told explicitly to reflect on our progress as well as our feelings, which I think is important to remind students to do as well.

This activity reminded me of a bridge-building homework project we had when I was a student in high school. We were given a large number of toothpicks and told to build a bridge that had to withstand a certain amount of weight. But we had only those materials and no more so there was no chance to build prototypes and test, no room for failure. I spent a ton of time on my bridge, but it fell apart immediately on the day of testing. I still remember the feeling of frustration and self-criticism... I had no idea what went wrong and there was no chance to learn from my mistakes and go forward. I decided that I just sucked at making things, which has taken me years to even start to undo. For kids who are perfectionists and fear failure, it is so important to give tasks with low entry points and where failure is accepted and even celebrated, where it's the only way to make something worthwhile. I know that we say this a lot in education, but so many of our tasks and assessments are still one-shot deals. You did it wrong this time = you don't know how to do this. The more opportunities that we can create that are iterative and incorporate feedback and reflection, the more we teach to a growth mindset rather than just giving it lip service.
Posted by Anna Blinstein at 10:24 PM